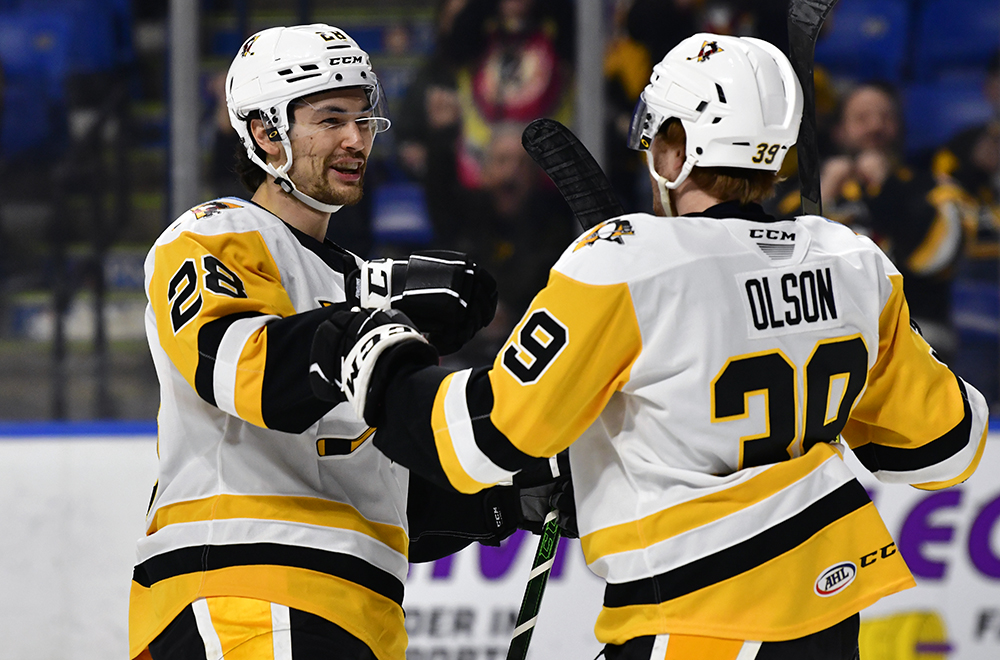 WILKES-BARRE, Pa. – The Wilkes-Barre/Scranton Penguins secured a 3-1 win over the Hershey Bears on Friday night at Mohegan Sun Arena at Casey Plaza.

Wilkes-Barre/Scranton (13-6-1-2) scored quickly to build a lead and then held on for the rest of regulation. The Penguins’ penalty kill went four-for-four, consistently closing any potential windows for a Bears comeback.

The Penguins continued their hot scoring from last weekend, notching two goals early. The first of the pair was from Jonathan Gruden, a net-front redirection at the five-minute mark.

Gruden’s goal was followed by a Tyler Sikura shot that bounced off a Hershey defender and between the five-hole of Zach Fucale at 8:37.

The Penguins’ 2-0 lead persisted through the second period as the team’s penalty kill thwarted three straight man-up opportunities for the Bears.

The third period opened with a breakneck pace, as Drake Caggiula hit the post on a breakaway six seconds into the frame. Hershey responded with several odd-man rush opportunities, none of which got past Dustin Tokarski. Eventually, Sam Houde scored on a wraparound to establish a three-goal lead for Wilkes-Barre/Scranton at 3:48.

Tokarski had his shutout spoiled when Gabriel Carlsson tallied the Bears’ only goal of the night with 49.7 seconds remaining in regulation.

Tokarski finished with 29 saves, while Fucale turned away 23 shots in the loss.

Catch the Next Penguins Game Tomorrow at Saturday

Wilkes-Barre/Scranton’s next game is tomorrow, Saturday, Dec. 17, a rematch with the Hershey Bears at Mohegan Sun Arena at Casey Plaza. Saturday’s game is also the Penguins’ annual Teddy Bear Toss. After the Penguins’ first goal, fans will throw new, unwrapped stuffed toys onto the ice, which will be donated to children in need this Holiday season through Tobyhanna Army Depot Operation Santa Clause.