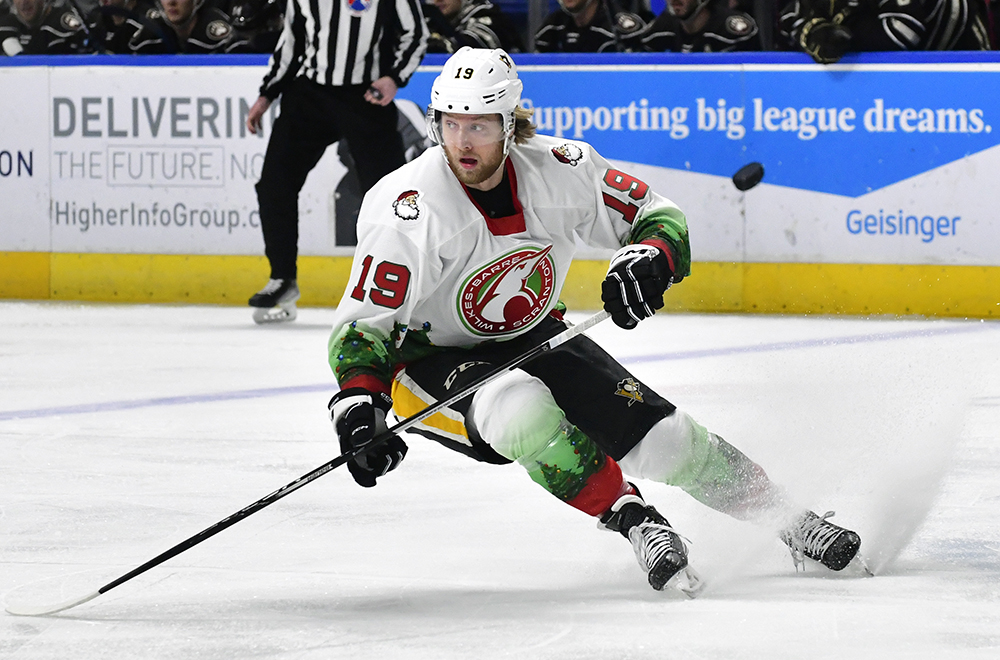 WILKES-BARRE, Pa. – Alex Nylander sent the Teddy Bears sailing on Saturday night, but the Wilkes-Barre/Scranton Penguins fell to the Hershey Bears, 2-1, on Saturday night at Mohegan Arena at Casey Plaza.

Nylander Scored Against the Penguins

Wilkes-Barre/Scranton (13-6-2-2) received its lone goal from Nylander on Teddy Bear Toss Night. A crowd of over 6,300 littered the ice with stuffed toys following Nylander’s strike. All of them will be donated to charity through Tobyhanna Operation Santa Claus (a charitable private organization operating at Tobyhanna Army Depot).

However, Hershey received a pair of tallies from Mike Sgarbossa. He was the only player to foil an otherwise stellar performance by Penguins goalie Filip Lindberg.

Sgarbossa lit the lamp at 8:11 of the first period to give the Bears a 1-0 lead.

Fans had to keep their teddy bears holstered until 18:48 of the second period. Then Nylander spread joy and holiday spirit far and wide by taking advantage of a Hershey miscue.

Goalie Clay Stevenson left his net to play the puck behind his cage, but threw it right off the body of Penguins forward Drake Caggiula. A mad scramble ensued at the side of the Bears’ net, and Nylander muscled the puck across the line for his ninth goal of the season.

The game remained even through the final frame, with both Stevenson and Lindberg producing great saves to get the game to overtime. Sgarbossa scored his second of the night with a backhander on a two-on-one rush with 1:01 left in the extra session.

Filip Lindberg turned away 30 of the 32 shots that Hershey threw at him, including several second and third-chance opportunities throughout regulation. Stevenson finished with 23 saves.

Catch Nylander at the Next Penguins Game

The Penguins hit the road for their next game, Tuesday, Dec. 20 against the Toronto Marlies at Coca-Cola Coliseum. Game time is slated for 7:00 p.m.

Wilkes-Barre/Scranton’s next home game is another rematch with Hershey, Tuesday, Dec. 27. Puck drop between the Penguins and Bears is slated for 7:05 p.m. at Mohegan Sun Arena at Casey Plaza.