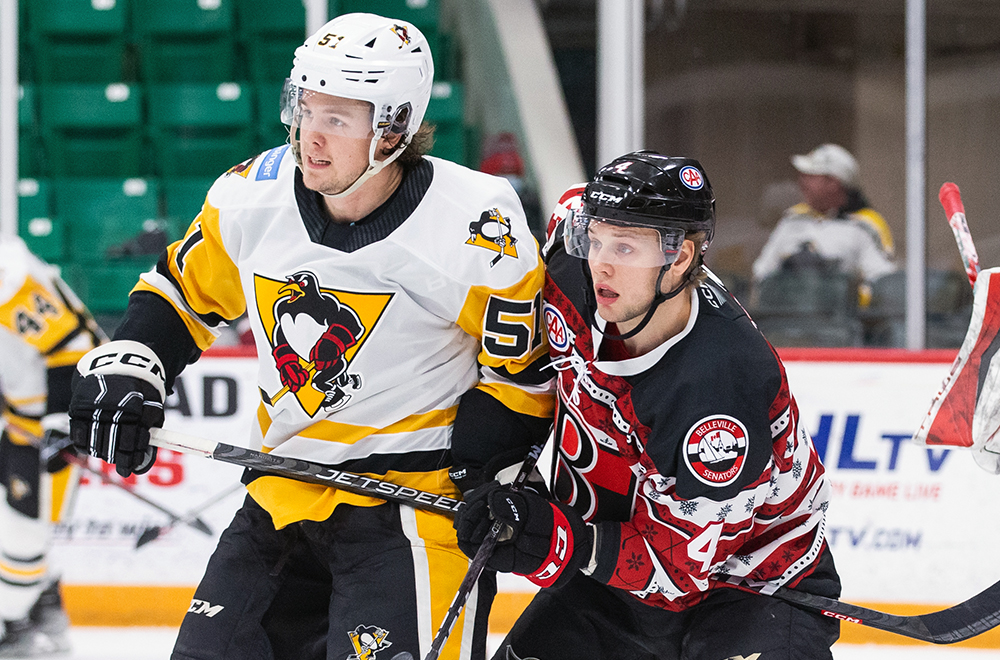 BELLEVILLE, Ont. – The Wilkes-Barre/Scranton Penguins fell to the Belleville Senators, 3-1, on Wednesday night at CAA Arena.

Wilkes-Barre/Scranton (13-8-2-2) stormed out of the gates with a plethora of opportunities, but ended up at an even score going into the third period. The Senators pulled away in that final frame, handing the Penguins the second loss of their Canadian road trip.

The Penguins out-shot the Senators, 12-5, in the opening frame. Despite their efforts, the Penguins were held scoreless in that first period. All attention shifted to Wilkes-Barre/Scranton’s crease, because starting goalie Filip Lindberg left the game at the 13-minute mark and was replaced by backup Dustin Tokarski.

How Did Tokarski Do It?

Tokarski was tested often in the second period, as the Senators were awarded back-to-back power plays. Tokarski turned aside shot after shot during those Belleville man-advantages, but a fluky bounce fooled him at 14:23. Jayce Hawryluk attempted to pass the puck from the goal line to the slot, but misfired, and the puck rolled off the heel of his stick, along the goal line and snuck past Tokarski on the short side.

The Penguins responded in short order, getting a rebound goal from Xavier Ouellet just 1:35 later.

Tied 1-1 going into the third, Belleville was awarded another power play. They did not cash in until eight seconds after the man advantage expired, when Brennan Saulnier collected a blocked shot and fired it off the post and in.

Ridly Greig gave the Senators insurance with a penalty shot goal at 7:45 of the third period.

Tokarski stopped 27 of the 30 shots he faced in relief, replacing Lindberg after the rookie made three saves. Mads Søgaard earned the win with 24 saves.

The Penguins wrap up their Canadian road trip against the Laval Rocket on Friday, Dec. 23. Puck drop between the Penguins and Rocket is scheduled for 7:00 p.m. at Place Bell.

Don’t Miss the Next Penguins Game

Wilkes-Barre/Scranton’s next home game is a head-to-head with the Hershey Bears, Tuesday, Dec. 27. Game time for the ninth meeting of the season between the Penguins and Bears is slated for 7:05 p.m. at Mohegan Sun Arena at Casey Plaza.