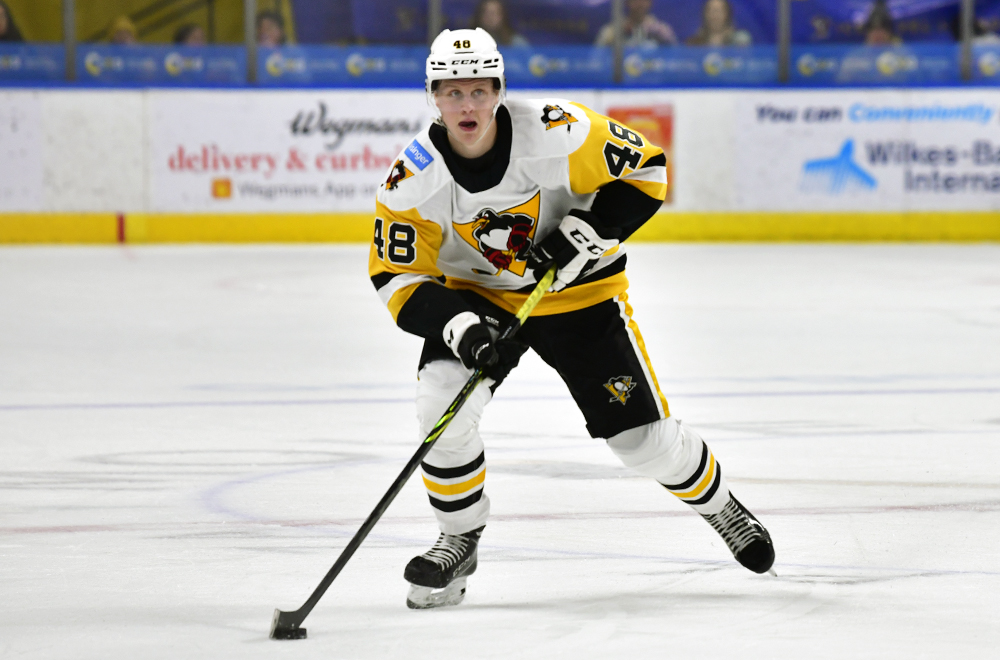 WILKES-BARRE, Pa. – The Wilkes-Barre/Scranton Penguins put forth a valiant effort in a 4-3 loss to the Providence Bruins on Friday night at Mohegan Sun Arena at Casey Plaza.

Valtteri Puustinen found the back of the net twice for Wilkes-Barre/Scranton (13-9-2-3), but a late, third-period turnover proved costly in an otherwise diligent, hard-working performance by the Penguins.

The Penguins opened the scoring on the power play. With the Bruins in the box for too many men on the ice, Sam Houde labeled a pinpoint shot over the glove of Bruins goalie Brandon Bussi at 7:47 of the first period. However, Wilkes-Barre/Scranton was quickly booked for its own too many men bench minor, which allowed Providence’s Georgii Merkulov to tie the game.

Providence notched another man-advantage marker midway through the second period. Mike Reilly’s seeing-eye shot through traffic gave the visitors their first lead of the night, 2-1.

Puustinen’s first of the game arrived late in the middle frame. Puustinen caught Bussi cheating off his near-side post and rifled a shot past the unsuspecting netminder with 1:47 left before the second intermission.

The Bruins climbed back ahead, 3-2, with a bar-down blast from Connor Carrick three minutes into the third period.

That tender, one-goal lead persisted until the late stages of the third. Rushing through the neutral zone, the Penguins lost the puck – and their balance – affording the Bruins a two-on-one rush. Oskar Steen buried his look with 2:49 to go, securing him a three-point night (1G-2A).

Never willing to lie down and concede defeat, the Penguins kept pushing. They pulled their goalie for an extra attacker, which led to Puustinen’s second goal of the night and 11th goal of the season. Wilkes-Barre/Scranton continued to wreak havoc in the final minute of play, but couldn’t muster an equalizer.

Wilkes-Barre/Scranton’s next game is tomorrow, Saturday, Dec. 31, a New Year’s Eve clash with the Lehigh Valley Phantoms at PPL Center. Game time for the Penguins and Phantoms is scheduled for 7:05 p.m. The Penguins return home again for their first game of 2023 on Wednesday, Jan. 4 against the Charlotte Checkers. Puck drop between the Penguins and Checkers is slated for 7:05 p.m. at Mohegan Sun Arena at Casey Plaza.