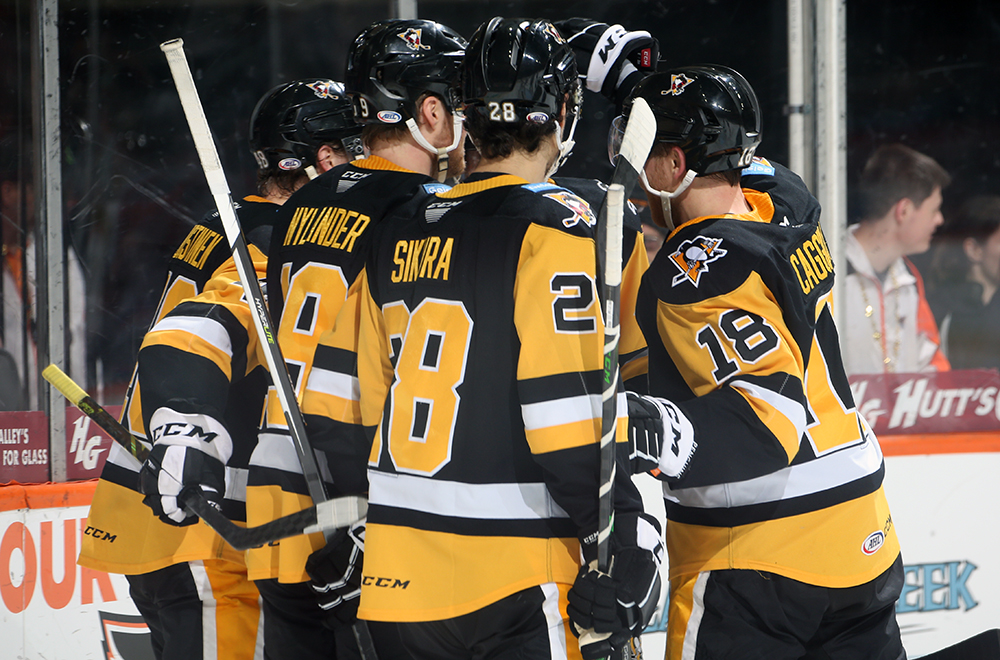 BOXSCORE – ALLENTOWN, Pa. – The Wilkes-Barre/Scranton Penguins wrapped up the calendar year with a 4-1 victory over the Lehigh Valley Phantoms on New Year’s Eve at PPL Center.

Wilkes-Barre/Scranton (14-9-2-3) played a complete game from start to finish and received a strong effort from rookie goalie Taylor Gauthier. Gauthier turned in 29 saves to secure the win in his AHL debut.

For the second game in a row, Penguins forward Sam Houde opened the scoring. Houde redirected a shot by Filip Hållander past Phantoms goalie Pat Nagle at 4:25 of the first frame.

Lehigh Valley responded with a power-play goal by Cooper Marody at the eight-minute mark, but Wilkes-Barre/Scranton reestablished its lead on its first man advantage of the night. Valtteri Puustinen potted his team-leading 12th goal of the season at 14:31, giving the Penguins a 2-1 lead going into the first intermission.

Drake Caggiula extended that lead to 3-1 at 12:44 of the second period with a perfectly calibrated slap shot that torpedoed over the glove of Nagle and directly into the top corner.

Gauthier and the Penguins clamped down in the third period, and eventually rounded out the scoring with an empty-net goal from Corey Andonovski.

Nagle finished the night with 30 saves for Lehigh Valley

Wilkes-Barre/Scranton’s first game of the New Year is back at home against the Charlotte Checkers on Wednesday, Jan. 4. Puck drop between the Penguins and Checkers is slated for 7:05 p.m. at Mohegan Sun Arena at Casey Plaza.