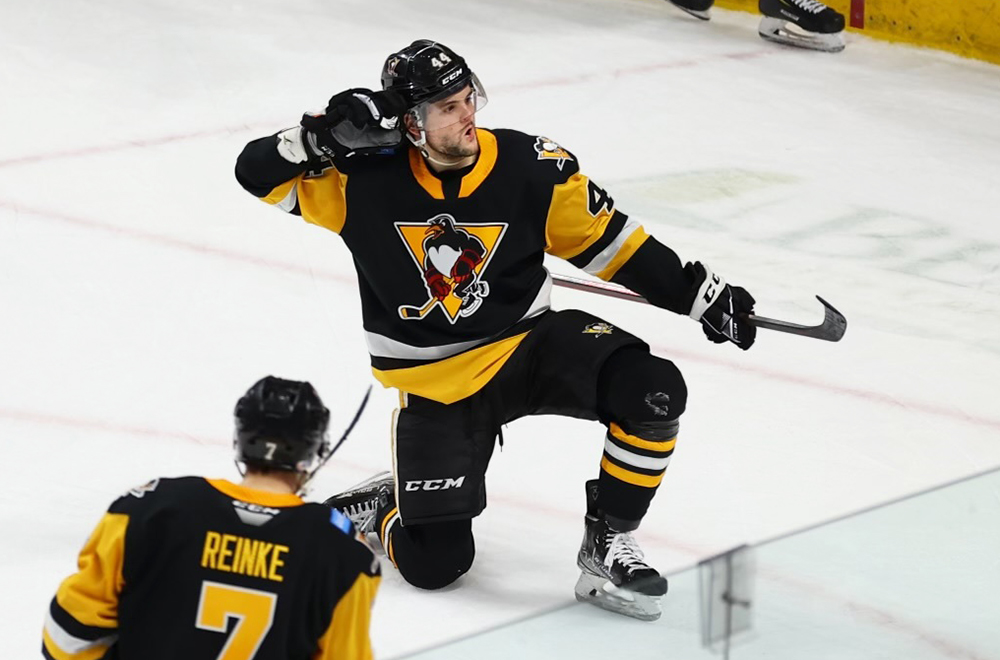 HERSHEY, Pa. – The Wilkes-Barre/Scranton Penguins staved off a Hershey Bears comeback and won in overtime, 4-3, on Wednesday night at Giant Center.

For the second game in a row, Wilkes-Barre/Scranton (17-10-2-3) received a pair of goals from Jonathan Gruden. This time, Gruden added an assist for a three-point outing, and he capped off his hard-working effort by tallying the overtime winner.

Hershey stormed back from a three-goal deficit by tallying three times in the third period to force overtime. However, Gruden broke their hearts by quickly scoring 29 seconds into the extra frame.

Gruden opened the scoring four minutes into the second period, chipping in a shot from Mitch Reinke.

The Penguins extended their lead to three with a rookie duo notching their first AHL goals. First, Lukas Svejkovsky made a slick move on a breakaway, making it 2-0 at 12:53 of the middle frame. One and a half minutes later, Raivis Ansons struck while shorthanded.

The first goal in Hershey’s comeback came on the power play at 4:40 of the third period. Mike Sgarbossa batted in a rebound to put the Bears on the board. Vincent Iorio scored to bring the Bears within one at 14:39, and Sgarbossa lit the lamp again with an extra attacker on the ice in the final minute of regulation.

Taylor Gauthier made 20 saves while making his fifth-straight start for the Penguins, while Hunter Shepard denied 22 shots in the Bears’ crease.