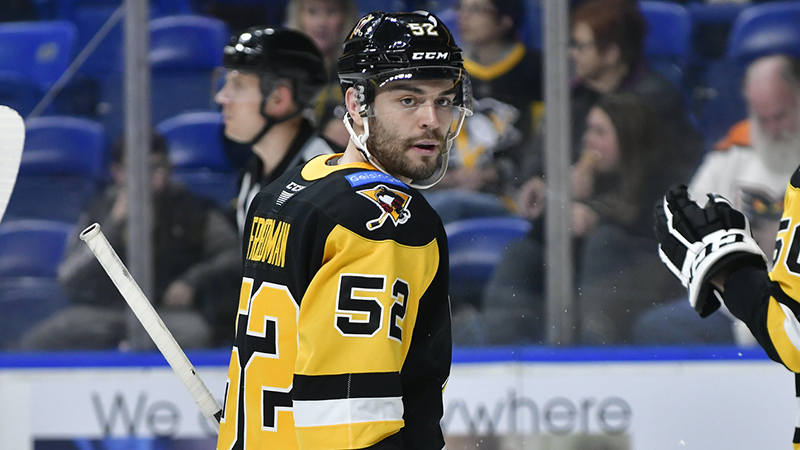 The Pittsburgh Penguins have re-assigned defenseman Mark Friedman to the Wilkes-Barre/Scranton Penguins of the American Hockey League, it was announced today by general manager Ron Hextall.

Forward Ryan Poehling and goaltender Tristan Jarry have been placed on injured reserve retroactive to December 30 and January 2, respectively.

Friedman, 27, has played in three games with Pittsburgh this season and is a plus-3. This season with WBS, Friedman has recorded one goal, four assists and is plus-5 in 19 AHL games.  He has been plus or even in 16 of his 19 AHL games this year.

The 5-foot-11, 185-pound defenseman has played parts of three seasons in the Penguins’ organization.

Last season, Friedman played a career-high 26 games with Pittsburgh, scoring one goal, four assists and five points.  The defenseman also appeared in six games with the Penguins during the 2022 Stanley Cup Playoffs, tallying one goal.

The Toronto, ON native has played in 45 career NHL games, split between the Penguins and Philadelphia Flyers, recording three goals, six assists and nine points.

He has also skated in 207 career AHL games with the WBS Penguins and Lehigh Valley Phantoms, registering 11 goals, 55 assists and 66 points, and scored two goals in 12 AHL playoff games with Lehigh Valley.

Friedman was originally drafted in the third round (86th overall) of the 2014 NHL Draft by the Philadelphia Flyers.

The Penguins acquired the defenseman on February 24, 2021 when they claimed him off waivers from Philadelphia and extended his contract through the 2023-24 campaign on March 20, 2022.

Wilkes-Barre/Scranton’s next game is Wednesday, Jan. 11 against the Hershey Bears at Giant Center. Puck drop between the Penguins and Bears is scheduled for 7:00 p.m.

The Penguins’ next home game is the following Wednesday, Jan. 18, when they take on the Syracuse Crunch. Game time for the first meeting of the season between the Penguins and Crunch is slated for 7:05 p.m. at Mohegan Sun Arena at Casey Plaza.