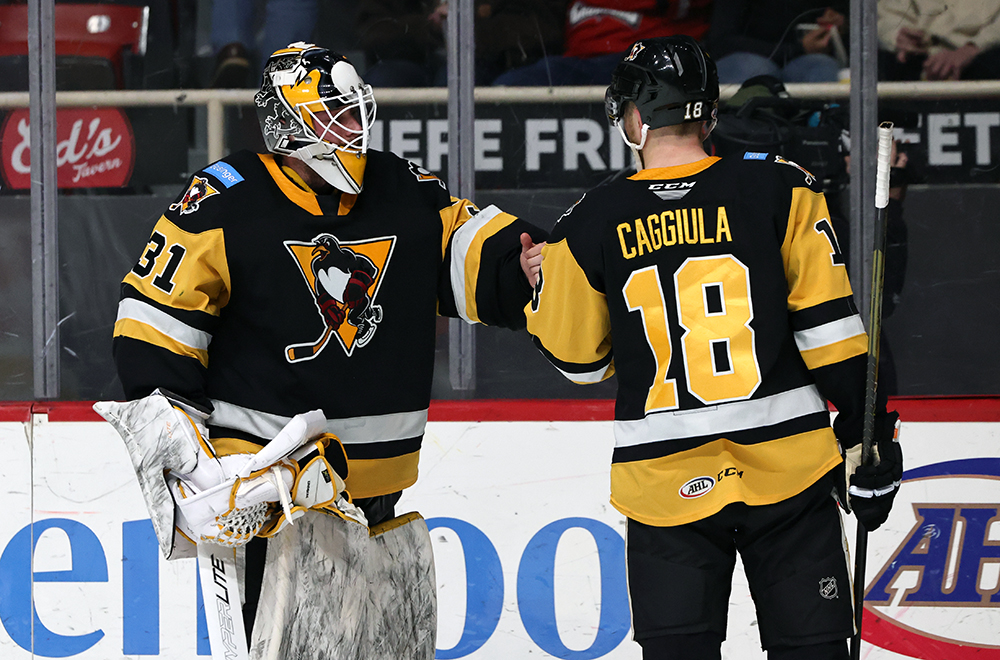 CHARLOTTE, N.C. – The Wilkes-Barre/Scranton Penguins bounced back and defeated the Charlotte Checkers in a shootout, 3-2, on Sunday night at Bojangles’ Coliseum.

Wilkes-Barre/Scranton (18-11-2-3) utilized a spectacular performance by its goaltender, Filip Lindberg, to avenge its loss to Charlotte the night before. Lindberg made 29 saves, including five jaw-dropping stops in overtime.

Both Alex Nylander and Lukas Svejkovsky scored on their shootout attempts for the Penguins, and then one final glove stop by Lindberg secured the win.

Lindberg was strong from the onset, turning away each of the Checkers’ 10 shots in the first period, several of which came from point-blank range or rebounds.

Charlotte pulled even at 4:41 of the middle frame when Matt Kiersted redirected a pass from recently reassigned Checkers captain Zac Dalpe.

Lucas Carlsson delivered a cannonading slap shot to put the Checkers on top, 2-1, 1:12 into the third period.

The Penguins tied the game, 2-2, on their sixth power play of the contest. Valtteri Puustinen tipped in a point shot midway through the final frame of regulation for his 14th goal and 29th point of the season.

Immediately after the Puustinen power-play goal, Wilkes-Barre/Scranton was booked for a faceoff violation penalty that put them on the penalty kill. Nine seconds into that man advantage, Lindberg conjured an acrobatic, lunging save that prevented Charlotte from reestablishing its lead.

Lindberg stretched out post-to-post for three of his five stops in overtime, stunning the Checkers each time. He also stymied Charlotte’s first and third shootout attempts, improving to 3-0 in shootouts this season.

Bérubé, the Checkers’ goalie, recorded 32 saves in regulation and overtime, but was beaten on both of the Penguins’ shootout bids.

Check Out the Next Penguins Game!

Wilkes-Barre/Scranton returns home to take on the Syracuse Crunch in its next game on Wednesday, Jan. 18. The first meeting of the season between the Penguins and Crunch is slated for 7:05 p.m. at Mohegan Sun Arena at Casey Plaza.