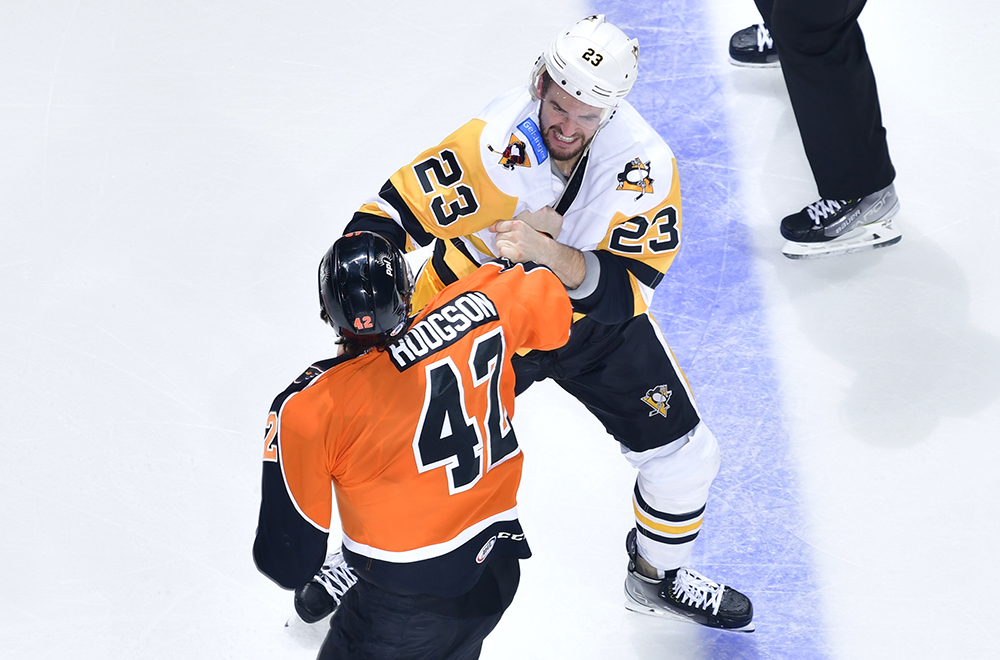 Wilkes-Barre/Scranton (18-13-2-3) fell behind when Lehigh Valley produced four unanswered goals in the second period. The next frame included four different fights separated by 21 seconds of game time, but a comeback wasn’t the card for the Penguins.

Lukas Svejkovsky put the Penguins on the board first, knocking in his own rebound midway through the first period.

Wilkes-Barre/Scranton was awarded a five-on-three, two-man advantage for 1:55 of game time later in that first period, but could not convert.

Lehigh Valley began its onslaught early in the middle frame, with Wyatte Wylie launching a slap shot to back of the net at 1:52. Two and a half minutes later, Tyson Foerster put the Phantoms ahead, 2-1.

Foerster notched his second of the night at 16:01, followed by a backdoor tap-in by Bobby Brink at 17:12.

Nathan Légaré gave the Penguins fans in attendance hope of a comeback when he scored 3:39 into the third period. However, Jordy Bellerive reestablished the Phantoms’ three-goal edge 2:17 later.

Josh Maniscalco and Bobby Brink kicked off the streak of donnybrooks when they dropped the gloves at 11:27 of the third. After that, Jamie Devane and Hayden Hodgson squared off, followed by fights between Corey Andonovski and Garrett Wilson as well as Sean Josling and Adam Brooks.

Wilkes-Barre/Scranton’s next game is tomorrow, Saturday, Jan. 21, as the Penguins pay a visit to the Bridgeport Islanders. Game time is 7:00 p.m. at Total Mortgage Arena.

The Penguins’ next home game is next Saturday, Jan. 28, another bout with the Islanders. Puck drop for the Penguins and Islanders’ second meeting of the month is slated for 6:05 p.m. at Mohegan Sun Arena at Casey Plaza.