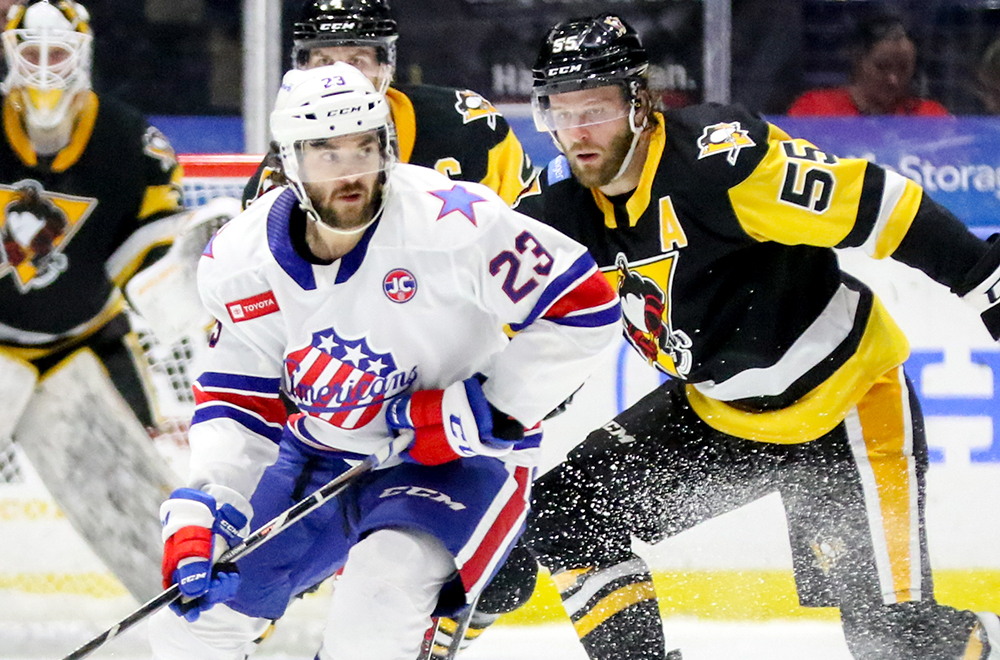 How Did the Game Go?

Wilkes-Barre/Scranton (19-15-2-3) cruised to a 2-0 lead in the first period, but Rochester slowly climbed its way back into the contest. Playing his first AHL game in five seasons, Vinnie Hinostroza delivered the winning goal for the Americans early in the third period.

Former American Alex Nylander opening the scoring for the Penguins four minutes into the night by burying a one-timer on the power play.

Rochester thought it had tied the game when Filip Cederqvist redirected a shot from the point to the back of the Penguins’ net, but video review uncovered that Cederqvist had tipped the puck with a high stick. Wilkes-Barre/Scranton then extended its lead to 2-0 on a sneaky shot from Sam Houde at 14:28.

The Amerks officially got on the board at 4:02 of the second period. Lawrence Pilut received a drop pass in the high slot and then sent a knuckleball over the glove of Filip Lindberg. Jérémy Davies knotted the score, 2-2, six and a half minutes later.

After Lindberg pulled off several magic acts while Wilkes-Barre/Scranton was on the penalty kill to keep the game tied, Hinostroza ripped a wrist shot past the Penguins’ netminder for a go-ahead, power-play goal at 4:42 of the third.

Lindberg finished the game with 26 saves, while Malcom Subban turned away 24 shots for Rochester.

Don’t Miss the Next Penguins Game!

Wilkes-Barre/Scranton’s next game is Friday, Jan. 27, as the team travels down the PA Turnpike to take on the Lehigh Valley Phantoms. Game time between the Penguins and Phantoms is scheduled for 7:05 p.m. at PPL Center.

The Penguins’ next home game is Saturday, Jan. 28 against the Bridgeport Islanders. Puck drop for the Penguins and Islanders is slated for 6:05 p.m. at Mohegan Sun Arena at Casey Plaza.

CHRISTIAN THOMAS TO PLAY FOR TEAM CANADA IN SPENGLER CUP