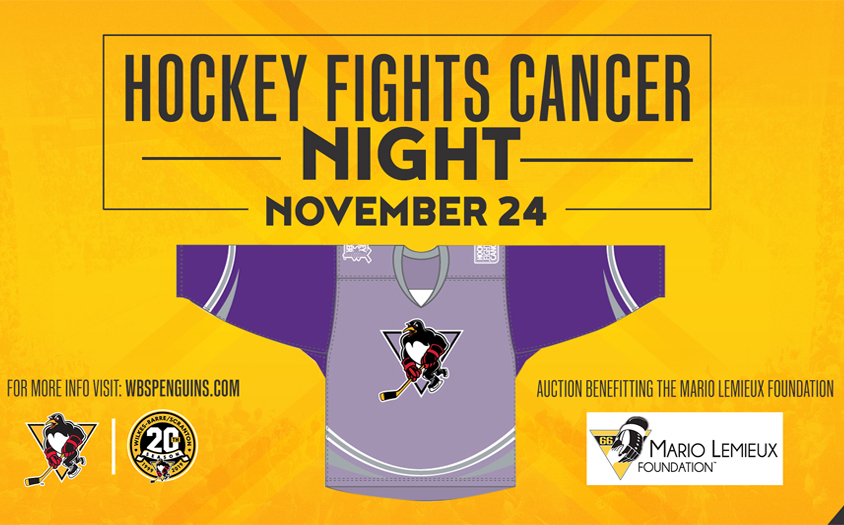 WILKES-BARRE, Pa. – The Wilkes-Barre/Scranton Penguins will be dropping the gloves against a deadly disease this month, as they participate in Hockey Fights Cancer™ throughout November.

Penguins players, hockey operations staff, and front office members will be showing their support displaying “I Fight For” signs on the team’s social media outlets during the month. Fans are encouraged to show who they support as well by either downloading an “I Fight For” card from the Penguins’ website (click here), or picking one up at the team’s game on Saturday, November 24 against the Hershey Bears.  Fans can then share their photos with the Penguins by using the hashtags #WBSHFC and #HockeyFightsCancer.

Additionally, the Penguins will be wearing special lavender Hockey Fights Cancer™ jerseys during the game on Nov. 24.  These sweaters will be auctioned off at the game and via the DASH Auction app, with all proceeds benefiting the Mario Lemieux Foundation.

Hockey Fights Cancer™ unites the hockey community in support of cancer patients & their families. The initiative gets an assist from players, coaches, officials, broadcasters, equipment managers, front office staff, corporate partners & fans. Together, the hockey community looks to inspire hope and courage for those who are living with, going through & moving past cancer.

To request more information on Hockey Fights Cancer night, fill in the form below.