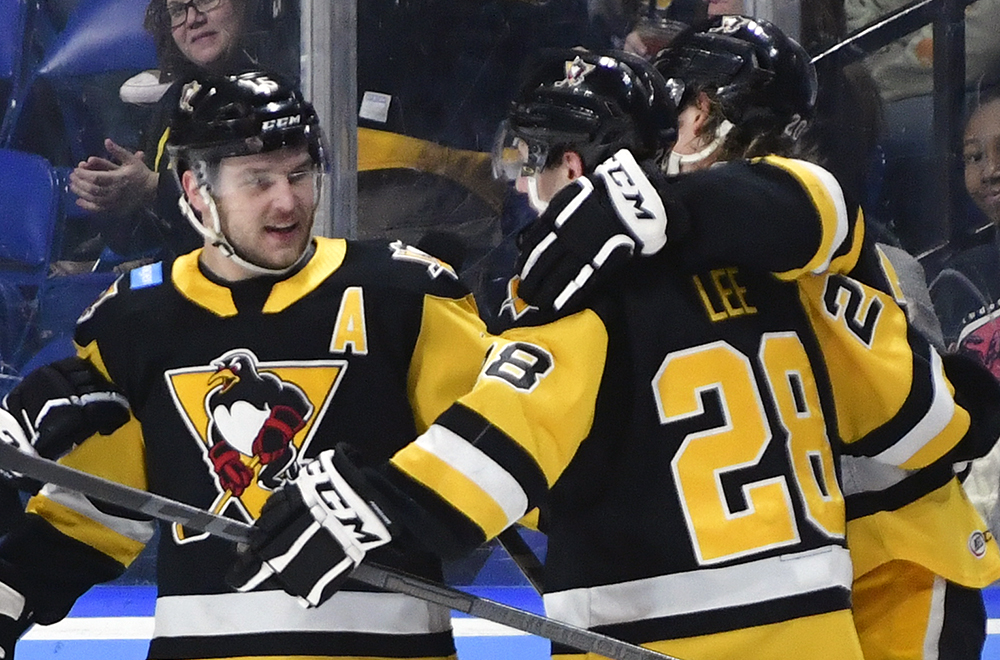 WILKES-BARRE, Pa. – In their first game back home after a long road trip, the Wilkes-Barre/Scranton Penguins defeated the Hartford Wolf Pack, 5-1, on Wednesday night at Mohegan Sun Arena at Casey Plaza.

Wilkes-Barre/Scranton (29-26-4-4) erupted for four goals in the second period and then added an insurance marker in the third to walk away with a decisive victory over a division rival.

The Penguins opened the scoring at 4:27 of the second period. Kasper Björkqvist picked the top corner after Kyle Olson forced a neutral zone turnover and created an odd-man rush.

Wilkes-Barre/Scranton then ballooned its lead to 4-0 by scoring three goals in 3:43 of game time. First, Will Reilly picked up his first goal of the season with a backdoor one-timer at 13:07. Sam Poulin converted on the power play three minutes later, and then Félix Robert lit the lamp 42 seconds after that.

Hartford stalled the scoring party and notched its first goal of the night with 1:02 left in the middle frame. Anthony Greco tipped in a shot from Patrick Khodorenko to put the Wolf Pack on the board.

The Wolf Pack appeared to pull within two of the Penguins at 2:54 of the third period, but Maxim Letunov’s redirection from the slot was waved off by the referee due to incidental contact with Penguins netminder Louis Domingue. Wilkes-Barre/Scranton then had one of its goals in the third period washed out when Nathan Légaré batted in a floating puck, but it was ruled a high stick.

The Penguins still managed to pad their lead when Michael Chaput converted on a two-on-one rush shortly after a successful, third-period penalty kill. Wilkes-Barre/Scranton’s P.K. went four-for-four on the night and has gone unpunctured for three-straight games.

Wilkes-Barre/Scranton’s next game is Friday, Apr. 1 against the Lehigh Valley Phantoms. Game time is scheduled for 7:05 p.m. at PPL Center. The Penguins’ next home game is the following day, Saturday, Apr. 2, against the Bridgeport Islanders.

Saturday’s game is also Marvel Super HeroTM Night at Mohegan Sun Arena at Casey Plaza. The Penguins will wear special, Black Widow-themed jerseys when they take on the Islanders at 6:05 p.m.