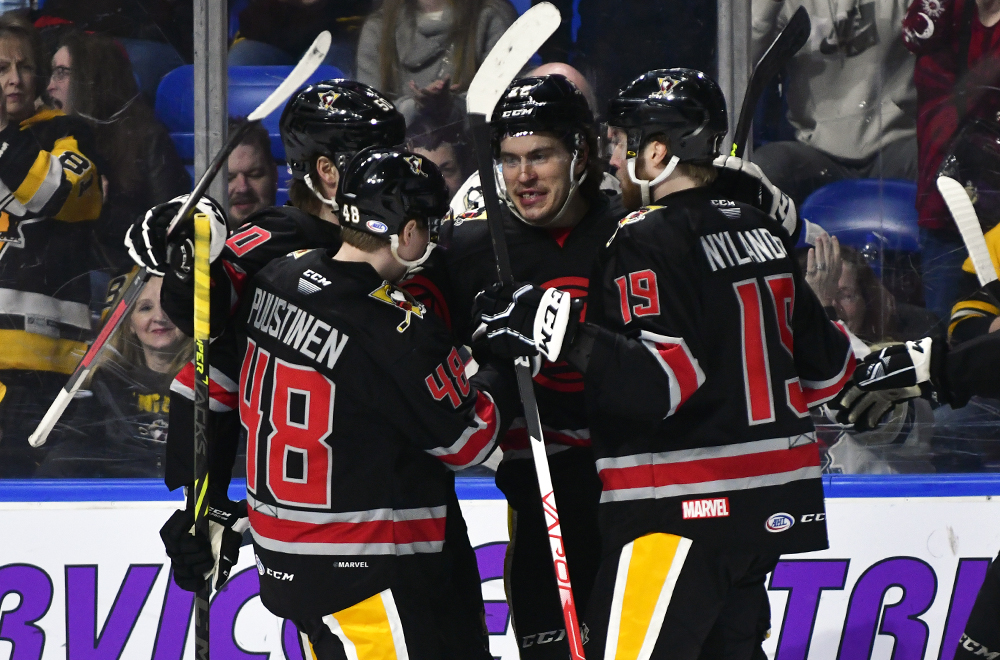 WILKES-BARRE, Pa. – The Wilkes-Barre/Scranton Penguins delighted a packed house at Mohegan Sun Arena with a dominant, 9-2 victory over the Bridgeport Islanders on Saturday night.

With playoff position hanging in the balance, Wilkes-Barre/Scranton (30-27-4-4) unloaded a franchise record-tying nine goals. Seven different Penguins accounted for those nine goals, and 15 different players recorded at least one point in the rout of their division rival.

Bridgeport managed to score the game’s first two goals, with Austin Czarnik and Chris Terry burying both of the Islanders’ tallies.

After that, it was all Penguins…

Alex Nylander started the frenzy at 13:48 of the first period. The Penguins then flipped their 2-1 deficit into a 4-2 lead by generating three goals in 1:30 of game time during the second period. Sam Poulin tied things up at 5:43 of the middle frame, followed by a strike from Jamie Devane 20 seconds later. Less than a minute after that, Félix Robert put the Pens up by two.

After that three-goal outburst, Bridgeport called its timeout. The break did little to stop the unrelenting pressure of the home team, who continued to run up the score.

Kyle Olson got in on the fun after he forced a neutral-zone turnover and finished with a backhand shot past Islanders goalie Jakub Škarek. Olson’s goal came with 4:05 left in the second stanza, and then Michael Chaput tacked on another with 2:10 remaining.

The Islanders switched goalies at the start of the third period, but it still resulted in more Penguins goals. Drew O’Connor beat backup Ken Appleby through the five-hole 28 seconds into the final frame.

Poulin notched his second of the night at 7:26 of the third period, and then O’Connor rounded out the nine-goal outing with his second tally arriving with 1:21 left in regulation.

The last time Wilkes-Barre/Scranton produced nine goals in a single game was February 19, 2010, another 9-2 triumph against the Albany River Rats.

Not to be overlooked, Penguins goaltender Louis Domingue turned away 29 shots in the win. Škarek recorded 25 saves on 31 shots faced before being replaced by Appleby, who denied 14 of 17 bids.

Wilkes-Barre/Scranton’s next game is Wednesday, Apr. 6 against the Lehigh Valley Phantoms. Puck Drop between the Penguins and Phantoms is scheduled for 7:05 p.m. at Mohegan Sun Arena at Casey Plaza.

Individual game tickets for the Penguins’ five remaining home games as well as season-ticket packages for the upcoming 2022-23 season are on sale now. Full-Season, 22-game, 12-game, Flexbook and Premium Seating plans are available by reaching out to the Penguins directly at (570) 208-7367.