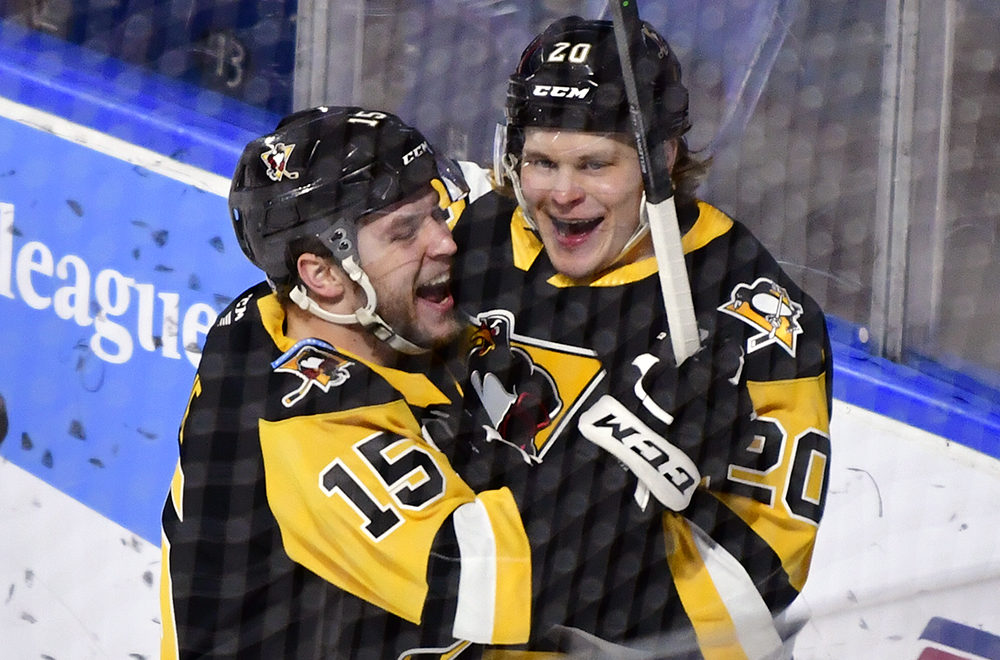 WILKES-BARRE, Pa. – The Wilkes-Barre/Scranton Penguins fought to the bitter end and were rewarded with a 3-2 overtime win over their rival, the Hershey Bears, on Friday night at Mohegan Sun Arena at Casey Plaza.

Wilkes-Barre/Scranton (32-29-4-4) tied the game with an extra-attacker goal late in regulation, setting the stage for Valtteri Puustinen to play the role of hero in overtime. Puustinen’s team-leading 19th goal of the season came on a power play in extra frame, earning the Penguins an important win in their playoff push.

Kasper Björkqvist opened the scoring for the Penguins at 4:54, sneaking a puck through the pads of Bears goalie Zach Fucale.

Hershey responded when Ethan Frank potted his first pro goal during a first-period power play at 10:48.

It took until the third period for either team to light the lamp again, but once more it was Hershey capitalizing on a man advantage. Mason Morelli polished off a bang-bang play at the Penguins’ net-front and gave the Bears a 2-1 edge at 8:49 of the third.

It looked as if Filip Hållander had tied the game shortly thereafter, but the officials ruled the Hållander had batted the puck across the goal line with his hand. After an extensive video review, the call on the ice was upheld, and Hershey remained ahead by one.

Despite the setback, Wilkes-Barre/Scranton refused to be denied.

With time winding down in regulation, the Penguins pulled their goalie for an extra attacker. After being thwarted on their first few looks, Juuso Riikola’s blast from the point was tipped in by Radim Zohorna. Zohorna’s deflection marked Wilkes-Barre/Scranton’s 10th extra-attacker goal this season, but more importantly, tied the game with 2:01 left in regulation.

Brett Leason was called for tripping 34 seconds into the extra period, and Puustinen made him pay roughly one minute later.

Wilkes-Barre/Scranton’s tying and winning goals were set up by Riikola and Alex Nylander, who both finished the game with a pair of assists.

Tommy Nappier earned the win in net for the Penguins with 28 saves, while Fucale turned away 35 shots for the Bears.

Wilkes-Barre/Scranton’s next game is tomorrow, Saturday, Apr. 16, against the Bridgeport Islanders. Saturday’s game is also the Penguins Fan Appreciation Night. Fans in attendance will receive a scratch-off card when they walk through the door, with every card giving away great gifts and prizes.

Puck drop between the Penguins and Islanders on Fan Appreciation Night will be 6:05 p.m. at Mohegan Sun Arena at Casey Plaza.

Individual game tickets for the Penguins’ two remaining home games as well as season-ticket packages for the upcoming 2022-23 season are on sale now. Full-Season, 22-game, 12-game, Flexbook and Premium Seating plans are available by reaching out to the Penguins directly at (570) 208-7367.