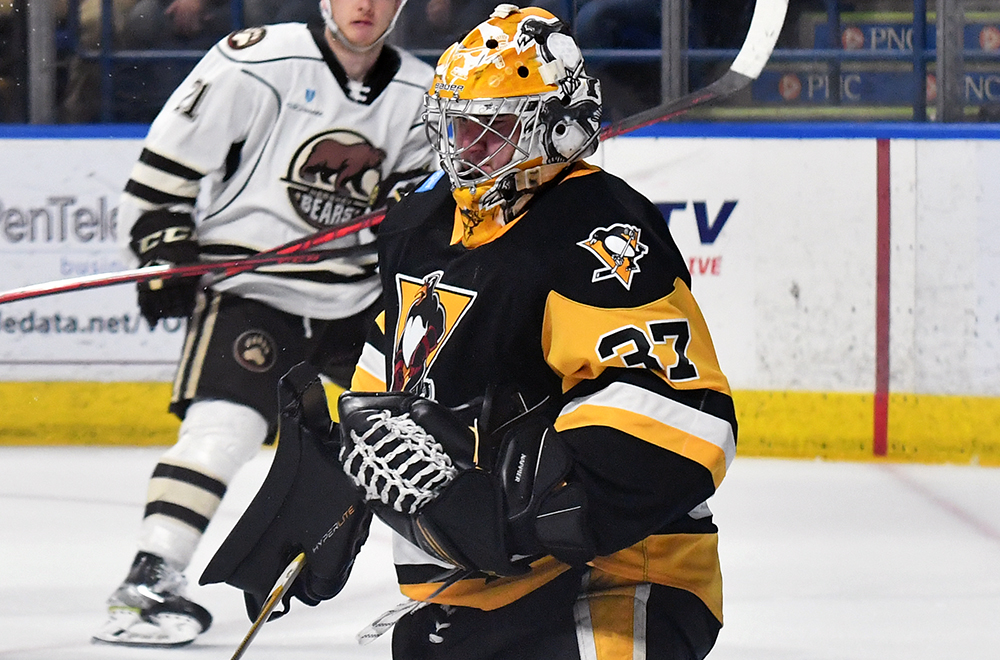 WILKES-BARRE, Pa. – Wilkes-Barre/Scranton goaltender Tommy Nappier turned in a 23-save shutout in his Calder Cup Playoffs debut, as the Penguins defeated the Hershey Bears, 3-0, in Game 1 of their best-of-three, first-round series in the Calder Cup Playoffs on Friday night at Mohegan Sun Arena at Casey Plaza.

The Penguins opened the scoring at 8:34 of the first period. Relentless pressure forced several Bears turnovers, the last of which culminated in Jonathan Gruden setting up Will Reilly for the first goal of the series.

Thirty-one seconds after Reilly kicked things off, Wilkes-Barre/Scranton utilized its insatiable forecheck to score again. This time, Alex Nylander tipped in a shot from Radim Zohorna.

Pierre-Olivier Joseph picked up the secondary assist on both of the Penguins first-period goals.

Nylander almost scored again later in the opening frame, but was robbed by Bears goalie Pheonix Copley. After Copley turned aside Félix Robert’s breakaway bid, he lunged out with his right pad to stymie Nylander’s crack at the rebound.

The Penguins out-shot the Bears by a 15-3 margin in the first period. Hershey found its footing throughout the second period, but that’s when Nappier started to come up big for the Black and Gold.

Still down 2-0 to start the third, Hershey rushed out with a purpose in the final frame. Nappier had to contend with 14 shots in the last period, including several tips and deflections through traffic. He stopped every one of them. By the end of regulation, Nappier had secured the 14th shutout in Penguins playoff history.

Zohorna sealed the victory with a power-play, empty-net goal late in regulation.

The next game in the Penguins’ and Bears’ Atlantic Division First Round series is Sunday, May 8. Game 2 will be at Giant Center with puck drop scheduled for 5:00 p.m.

The Penguins next home game will be either Monday, May 9 at 7:05pm (Game Three of the First Round series if necessary), or will take place in the second round at a date to be determined.