PENS TO FACE THUNDERBIRDS IN SECOND ROUND 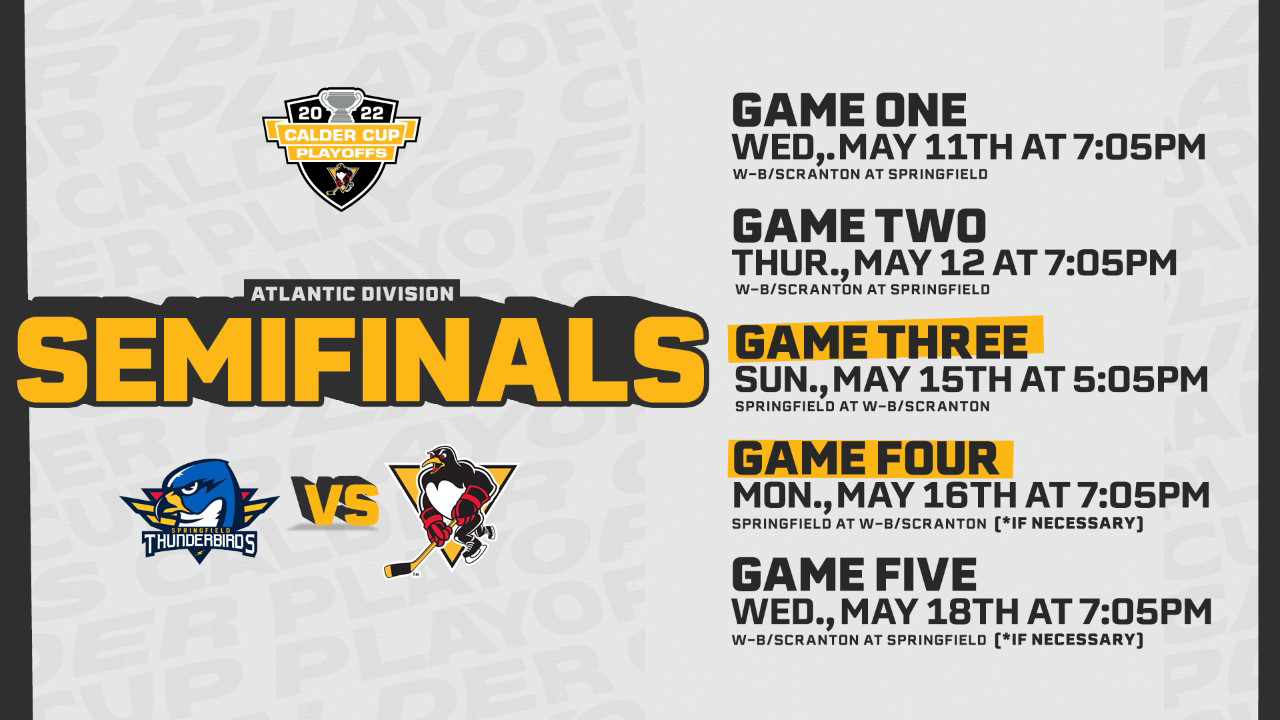 The Wilkes-Barre/Scranton Penguins will face the Springfield Thunderbirds in the Atlantic Division Semifinals after defeating the Hershey Bears, 4-3, in Game Three of their First Round Calder Cup playoff series on Monday night.

The Penguins will open the best-of-five, second-round series in Springfield on Wednesday, May 11. Wilkes-Barre/ Scranton will host its first home game of the series on Sunday, May 15 at 5:05 p.m.

Sunday’s contest will be a KIDS FREE SUNDAY, with fans ages 14 and younger able to get in FREE with a paid adult ticket.

The full series is as follows:

This will be the first ever postseason meeting between Wilkes-Barre/Scranton and Springfield, as this is the Thunderbirds’ first trip to the Calder Cup Playoffs. The T-Birds have been idle since Apr. 29, having earned a first-round bye with the second-best regular-season record in the Atlantic Division.

The Penguins are coming off a triumphant first-round series against the Hershey Bears. Wilkes-Barre/Scranton head coach J.D. Forrest led the team to his first playoff series win in his first postseason as the team’s bench boss, beating Hershey 2-1 in the opening series.

Individual tickets and full playoff packages for the Penguins’ postseason run are on sale now. Fans who wish to reserve their seats for Wilkes-Barre/Scranton’s games in the Calder Cup Payoffs can call the Penguins’ front office at (570) 208-7367 or visit Ticketmaster.com.

Penguins Playoff Packages include tickets to all potential home games during the Calder Cup Playoffs. This package includes a ‘Pay-As-We-Play’ plan, meaning your credit card will not be charged until a game is guaranteed to be played. Also included for each game in the plan is a $6 voucher per seat, good for use at any SAVOR-run concession stand, or at the Penguins Team Store inside the arena. Vouchers are good only for the game for which they are issued and cannot be carried over to future games.

Playoff Packages are available exclusively through the Penguins’ front office. Call (570) 208-7367 to lock in your seats for the postseason.