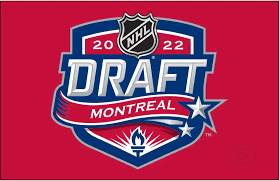 The National Hockey League entry draft begins tonight (July 7, 2022), and a new crop of NHL prospects will be selected over seven rounds of the the two day event.

More than 220 junior and college players will hear their names called during the event, with the draft being the first step to a professional career for many of those skaters.

For the first time since the start of the pandemic, the NHL Draft will take place with all teams gathering in one central location.  This year’s draft will be held at the Bell Center in Montreal.  This is the first time the Montreal Canadiens have hosted the draft since the summer of 2009.  Montreal was the home of the draft from 1963 through 1984.  This will be the 25th time the city has hosted the draft.

When will the 2022 NHL Draft take place?

The draft is a two day event, with the first round beginning at 7 p.m. on Thursday, July 7.  The second will see players selected in rounds 2-7 beginning at 11 a.m. on Friday, July 8.

The host team, the Montreal Canadiens, hold the first overall pick in the 2022 NHL Draft.  Montreal finished 32nd overall during the 2021-22 NHL season, and won the draft lottery to claim the top selection.

Hockey fans in the United States can watch the first round of the 2022 NHL Draft on ESPN and ESPN+.  Rounds 2-7 will be broadcast on the NHL Network and ESPN+.  Fans in Canada can watch the entire draft on Sportsnet and TVA Sports.

When do the Pittsburgh Penguins select in the 2022 NHL Draft?

Who are some of the top players in the 2022 NHL Draft?

While there is no consensus on who will be selected with the first overall pick, several players figure to have a chance at the top selection.  Forwards Shane Wright, Juraj Slafkovsky and Logan Cooley each have a chance to land with the Montreal Canadiens.  Cooley is of special interest to Penguins fans, as he grew outside of Pittsburgh and began playing in Sidney Crosby’s learn to play program.

Season-ticket packages for the Wilkes Barre Scranton Penguins’ upcoming 2022-23 regular season are on sale now. Full-Season, 22-game, 12-game, Flexbook and Premium Seating plans are available by reaching out to the Penguins directly at (570) 208-7367.