What is the Teddy Bear Toss? 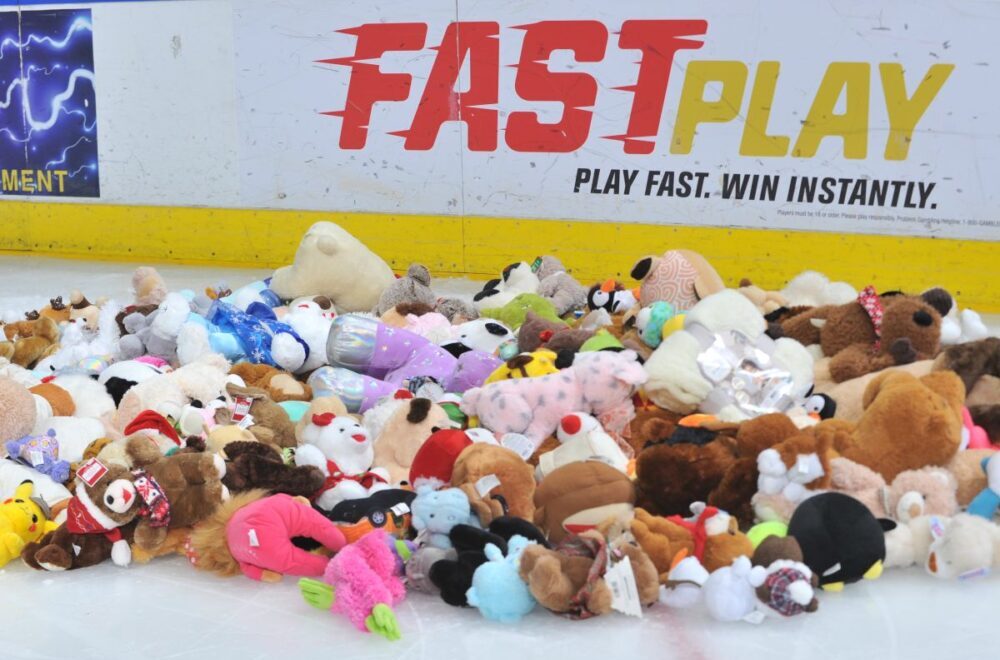 Now that Thanksgiving is over, one of the most cherished hockey traditions is coming up. Saturday, December 11th is our annual Teddy Bear Toss game. Come to the Mohegan Sun Arena to watch us play against the Hershey Bears and bring along a stuffed animal (or several) to partake in one of the most beloved games of the year.

If you haven’t attended a teddy bear toss game before, you can’t miss it! During a teddy bear toss, you’ll see fans throw stuffed animals of all sizes onto the rink, which are then collected and donated to charities. Seeing fans come together to give back is a heartwarming scene to kick off the holiday season, and watching fans of all ages toss every type of stuffed animal imaginable onto the ice is fun for everyone. Teddy bear tosses are common across the AHL, as well as other leagues in North America and around the world. Other sports have also picked up this initiative.

How Did the Teddy Bear Toss Get Started?

Despite the teddy bear toss being extremely popular in the hockey world, we’re not 100% sure where the tradition got started. The start of the teddy bear toss is often credited to the Western Hockey League team, the Kamloops Blazers, a junior hockey team based in Kamloops, British Columbia.

In 1993, fans at a Blazers’ game threw over 2,000 stuffed animals onto the ice after the team scored a goal. However, some also claim that another WHL team, the Regina Pats, started the tradition. While we might not ever know for certain who was the first to have their rink covered with teddy bears, it’s clearly had a huge impact on many teams and fans.

However, you won’t be able to catch a teddy bear toss at an NHL game. The NHL has strict rules against fans throwing anything on the ice.

Stuffed animals from teddy bear tosses go to amazing children’s causes, but they also spark some friendly competition between teams, and everyone wants to bring in more than the previous year. The current teddy bear toss record holder is extremely fitting – it’s the Hershey Bears.

In 2019, fans at a Hershey Bears game threw an astounding 45,650 stuffed animals onto the ice and set a world record in the process. The Hershey Bears’ teddy toss in 2019 broke the previous year, which they also held the record for.

Give Back this Holiday Season at Our Teddy Bear Toss

At the Wilkes-Barre Scranton Penguins, we give back to our community throughout the year, but we understand that this is especially important during the holiday season. If you’ve never attended a teddy bear toss before, you don’t know what you’re missing. Watching the community come together to make a difference is something we look forward to each year. Start stocking up on stuffed animals today for the big day!

Get your tickets for this year’s upcoming teddy toss game this year!