Who are the Officials in a Hockey Game? 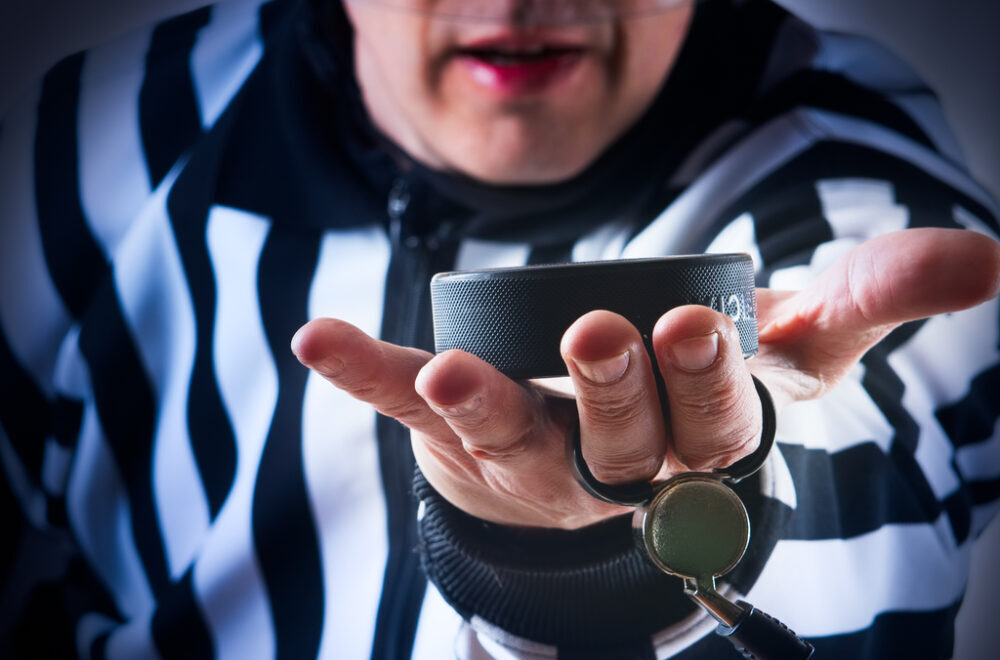 There are more than just players out on the ice during a game. Of course, you don’t have to be a major sports fan to know there’s a referee watching over the game. However, referees aren’t the only officials in hockey. Games also require linesmen, and you might not know how to differentiate the two positions and understand what specific responsibilities each has. Additionally, there are some behind-the-scenes officials you might not be familiar with who help keep things running.

So, who exactly are these men and women in the black and white striped shirts? Hockey officials are a vital part of any game, and we can help you learn more about them.

There are several types of officiating systems used in hockey, so how many officials you’ll see depends on the league you’re watching. The AHL, like the NHL, uses the four-official system. This means that games require four officials total – two referees and two linesmen.

However, it wasn’t always like this. The three-official system was used before the switch to the current system, which requires only one referee and two linesmen. Other leagues still use this system, but it creates extra work for the sole referee, making the four-official system preferable for higher-level leagues.

Referees and linesmen make up the on-ice officials. Both officials wear black and white striped shirts, so you might have a hard time telling them apart. However, the distinction is easy – referees wear a red or orange armband, while linesmen have no armbands.

The referee’s job is to supervise the game and enforce the rules. This includes calling penalties and goals. Referees are the only officials who can assign penalties. The referee is also in charge of conducting face-offs at center ice at the beginning of each period and after goals, talking to coaches and scorers, and starting and stopping plays. In the four-official system, each referee is responsible for one side of the rink.

Linesmen are in charge of watching for violations involving offside play at the blue lines and icing. While linesmen can’t call penalties, they can report violations to referees, who have the power to do so. Linesmen can stop a play in certain situations. As with referees, each linesman is responsible for one side of the rink.

In addition to referees and linesmen, who are on the ice throughout a game, there are also several off-ice officials.

A goal judge sits behind each goal and helps determine when a team has scored a goal. Referees can override the opinions of goal judges.

Video goal judges have access to recordings of goals, which are used for goals that are difficult to determine. When a goal is disputed, the video goal judge’s opinion overrides the referee’s.

Official scorers keep a record of the game’s scores.

A penalty timekeeper is responsible for ensuring players serve the appropriate amount of time for the penalty they receive.

Game timekeepers start and stop the game clock. They are also responsible for announcing when a period is nearly over. Game timekeepers have the final say regarding time disputes.

There are many moving parts in a hockey game and professionals who help ensure the game runs smoothly. Some you might be more familiar with, while others might be new to you. See which of the upcoming Wilkes-Barre Scranton Penguins games you can get tickets for and keep checking in with our blog to learn more!